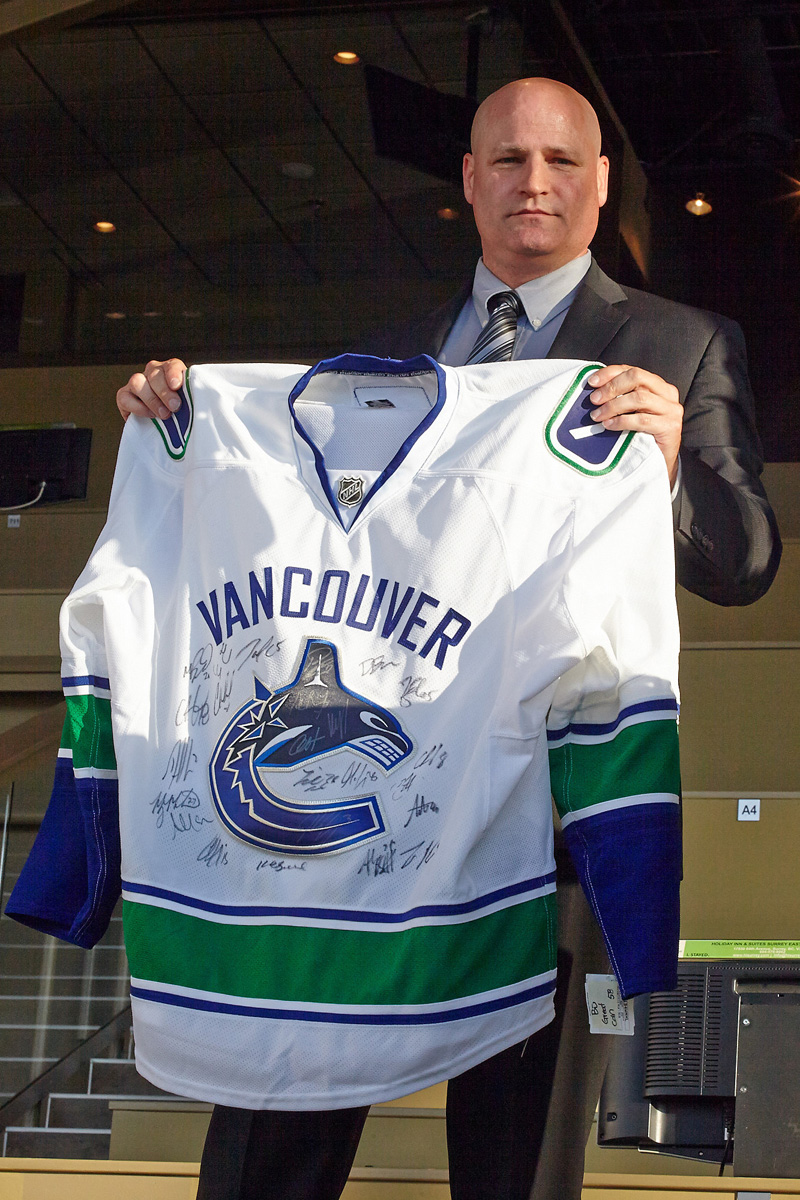 Ken Stratton, General Manager of Fraser Downs Racetrack and Casino holds an autographed Vancouver Canucks’ jersey, a silent auction item that helped raise funds for the families impacted by the Langley barn fire.
In the aftermath of the massive barn fire in Langley, B.C that resulted in the loss of 17 standardbreds, the horse racing community banded together Tuesday night and raised $30,000 in support of the impacted families.

“More than 200 people opened their hearts and wallets in an emotional show of support,” said Ken Stratton, General Manager of Fraser Downs Racetrack and Casino. “The horse racing population can be very competitive on track but when it comes to lending a helping hand in the time of need, these people are incredible.

“Staff at Fraser Downs and Harness Racing BC stepped up to the plate by working 15-hour days to make this happen. Everyone volunteered their time for both the silent and live auctions, resulting in 100% of the proceeds going to the cause.”

Silent auction items such as suite tickets to the Elton John concert at Rogers Arena, a Vancouver Canucks’ jersey autographed by the entire team, a Grey Cup leather jacket and a beautifully framed commemorative picture from the opening ceremonies of the 2010 Winter Olympics in Vancouver contributed to help the recovery and rebuilding process created by the fire.

Great Canadian Gaming Corporation properties Hastings Racecourse in Vancouver, B.C. and Ontario-based Georgian Downs and Flamboro Downs collected cash donations during race days at their respective sites. Of the total $30,000 raised, $10,000 was donated by Fraser Downs and Great Canadian Gaming Corporation while the remainder of the funds were collected through the silent auction event and fundraising efforts at the mentioned tracks.

“This tragedy had a profound effect on many members of the horse racing community, keeping in mind there was no insurance for the assets lost in the fire,” Stratton said. “To see people come together in this fashion was an emotional experience for all of us.”